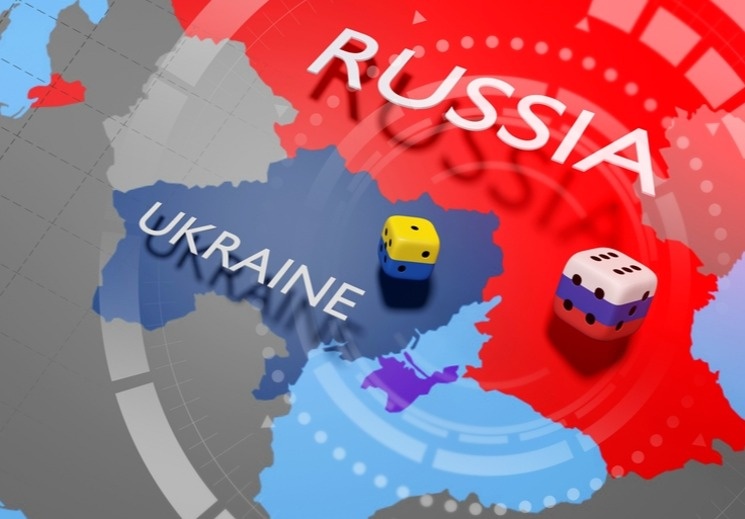 What the Russia-Ukraine Crisis May Mean for Investors

Even before Russia’s invasion of Ukraine on February 24, the financial markets were volatile. They were also poised to remain volatile all year thanks to inflation and the Federal Reserve’s plan to combat it by steadily raising short-term interest rates. Naturally, no one can predict how much-added volatility the crisis in Ukraine will create. But for those of you worried about this additional element of uncertainty, I’d like to share a few points that I think will help.

First, remember that in my 2022 market forecast, I explained that this year was likely to be more challenging than last year for several reasons. The Fed’s increasingly hawkish stance on interest rates was one of them, but another was the potential of some major geopolitical or humanitarian crisis abroad, and the Russia-Ukraine war qualifies as both. Second, remember that we also experienced some headwinds in early 2021 due to spiking long-term interest rates. Investors were just starting to worry about inflation at that time, but the Fed remained dovish and kept short-term rates near zero all year. As a result, any portfolio shrinkage you saw on your statements early last year was quickly recovered.

That brings me to my third point: We’re coming off a very good year. Ultimately, the S&P 500 was up double-digits last year and our stock portfolio still managed to outperform it by a few percentage points — and it did so with less volatility risk and a dividend yield that was more than three times higher. In the universe of bonds and bond-like instruments, Barclay’s Bond Aggregate Index was down 1.5% last year, but our clients’ portfolios were up roughly 7-9%. I mention all this because, as you know, we didn’t spend a lot of time patting ourselves on the back about it last year. That’s something you never do because you know this kind of performance won’t be possible every year due to market changes.

These changes are unavoidable but rarely unprecedented, which leads me to my fourth point: Remember 2018. So much has happened since then, it can be easy to forget that the Fed was also actively raising short-term rates at that time, and that it caused a lot of market volatility and created headwinds for investors. And by that, I mean all investors. As Warren Buffet correctly pointed out recently, rising interest rates make all financial assets worth less, just as raising the denominator on a fraction decreases the numeric value of the fraction. But here’s the main point: As we saw again last year, when you’re investing for income instead of growth, your losses are typically only temporary paper losses, and your income return is either unaffected or affected only slightly.

To share a perfect example of this, I recently did a review with a client who had around $660K in his portfolio at the start of 2018 and was reinvesting all the interest and dividends. Due to interest rate headwinds that year, by the end of 2018, he was down to about $63K — a loss of about 10 percent with interest and dividends factored in. This client had been with me since about 2013 and had started with about $500K. Despite that temporary loss in 2018, at the end of 2021 his portfolio was back up to over $800K.

So, again, his loss in 2018 was a temporary paper loss and then everything came back. I believe a similar scenario could take place again, where the comeback occurs not within the same year, but the following year or the year after that. Remember that — no matter how long it takes — the individual bonds in your portfolio are contractually obligated to come back. That’s one of the two guarantees you received when you bought them: the return of the face value of the bond if you hold it to maturity, and as long as the issuer doesn’t default.

The other guarantee, of course, is your fixed income payment for the life of the bond. To get back to my perfect example, in addition to seeing his values come back, this investor also saw his income go up every year, from $33k in 2018 to $37k last year. That’s also important to keep in mind as rates rise and market volatility continues: the idea that when you invest for income your focus really isn’t on your values anyway, but on the interest and dividend component of your strategy. Your income return is consistent, even though you’ve probably seen your values decrease again on your latest statement. But even those temporary losses are probably less than the markets might suggest. Just like last year, we’re again outperforming a lot of bond indices, and our stock portfolio is down just under 1% compared to about 8% for the stock market overall.

The Most Important Point

Remember all of this in the weeks and months ahead. This was already poised to be a more challenging year than 2021, and the crisis in Ukraine has only made it a bit more challenging, at least temporarily. Yet even if the war ends quickly — which we all hope it does, of course — the Fed’s plan for short-term interest rates could continue creating headwinds and market volatility all year, just as it did in 2018. On the other hand, as I pointed out in last month’s newsletter, we could also see all these situations stabilize soon and have another great year. That’s a long shot, but anything’s possible.

Here are two more important points to keep in mind. One: Historically, wars typically have a positive impact on the financial markets in the long run. There is a lot of initial volatility but ultimately, for a variety of reasons, the markets grow stronger in the wake of a major conflict. The second important point is this: In the big picture, the temporary financial impacts we feel mean little compared to the humanitarian impacts of this crisis on the people of Ukraine and Russia. So, let’s keep them in our thoughts and hope for a quick and peaceful resolution. 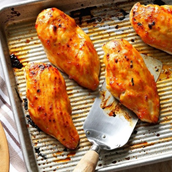 Preheat oven to 375°. In a small saucepan, combine the first five ingredients; cook and stir over medium heat until heated through.

Place chicken in a 9x13” baking dish coated with cooking spray. Bake chicken for 30 minutes, flipping halfway through, or until a thermometer reads 165°. Brush occasionally with preserves mixture during the last five minutes of cooking.