It’s official. The S&P 500 is now in a bear market, meaning down more than 20% from its early-year peak. The Nasdaq is also down around 35% after a June in which investors increasingly shifted their focus toward the possibility of a recession. The result was increased volatility across the board, but ultimately a bit of good news for income investors.

As May ended, investors were focused mainly on inflation and the Federal Reserve’s plan to reign it in by raising short-term interest rates. Investors seemed to have made their peace, somewhat, with the Fed’s rate hike schedule, and the S&P finished May with a slight gain for the month. But another bad inflation report in early June prompted selloffs throughout the markets. As Wall Street sank, a selloff in the bond market pushed the yield on the 10-Year US Treasury rate up to 3.48%, its highest level in 11 years.

As a result of more bad inflation news, the Fed announced it would get more aggressive. After saying twice that it planned to raise rates by a half-percent in June, the Fed instead approved a three-quarter percent rate hike, its biggest since 1994.* Because raising short-term rates — by its nature — slows economic growth, which is already slowing on its own, the Fed’s move intensified fears that a new recession is about to hit. A report by the Atlanta Fed last month argued we’re already in a recession, although we won’t really know until second-quarter earnings numbers are finalized in August. If those numbers show the GDP shrank from April to June, we’ll be in a recession because the economy already contracted in the first quarter.

While the stock market fell again after the Fed’s move, all the way into bear market territory, it did so this time to the benefit of the bond market. Whenever a recession becomes the main focus of worried investors, you often get a “flight to quality.” That’s when a large number of investors who pull out of the risky stock market then buy into the relatively safer bond market. That’s exactly what happened in June. As a result, bond values increased, prompting long-term interest rates to decrease. The 10-Year Treasury yield went from that decade high of 3.48%, back down to 3% within ten days, then ended the month at 2.97%.**

Regardless of whether the economy grew slightly or shrank in the second quarter, the main issue is that the economy is definitely slowing. As I’ve been saying all year, this makes the Fed’s job extremely tricky because it’s trying to raise rates just enough to slow inflation but not so much that it brings the slowing economy to a grinding halt and causes the recession everyone is so worried about. As I’ve also pointed out before, the main reason its job is so tricky is that it started too late. If the Fed had begun raising rates last year instead of ignoring inflation, it might not be in this predicament. Metaphorically speaking, it could have tapped the brakes and slowed the economy down gradually. As it is, the Fed now must slam the brakes and then determine how and when to speed up again, which is a much trickier procedure.

So again, this is why investors seemed to fully shift their focus from inflation to recession in June, resulting in all the market turmoil I just talked about. What does it all mean for your investments? Well, as you’ll see when you look at your latest statements, our stock strategies are down only about 2% on average and still beating the market by a wide margin — and still doing so with a 4% dividend yield. As for our more conservative strategies, that spike in long-term interest rates naturally brought the value of most bond and bond-like instruments down a little further. Year to date, most of you are probably down a bit more than 10% depending on your specific holdings. That’s a lot, but it’s not a 20-to-35% drop like the stock market is experiencing.

Of course, the most important thing, as I mention every month, is that if you look at the income column on your statements, you’ll see it hasn’t changed. Even in the midst of all this volatility, your income return has been consistent and reliable all year, and that’s why you’re here in the first place: because income is your priority, as it should be. And if you’re reinvesting the income it’s going up — and it’s going up at a faster pace now because with bond values down you’re able to buy more bonds and bond like instruments, which means more future income. And, of course, most of the assets in the bonds and bond-like instruments in your portfolio have a face value that is protected by contract and guaranteed to be paid back if you hold the investment to maturity, assuming there have been no defaults. So, stay focused on these things as the second half of the year gets underway; stay focused on why you’re here! As always, contact my office at any time if you have any questions — and have a great summer! 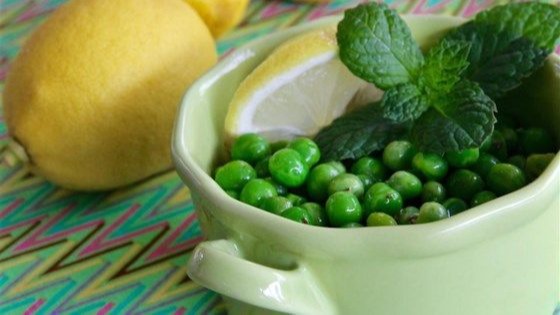 Mix peas, lemon, salt, and pepper together in a bowl. Refrigerate until serving.