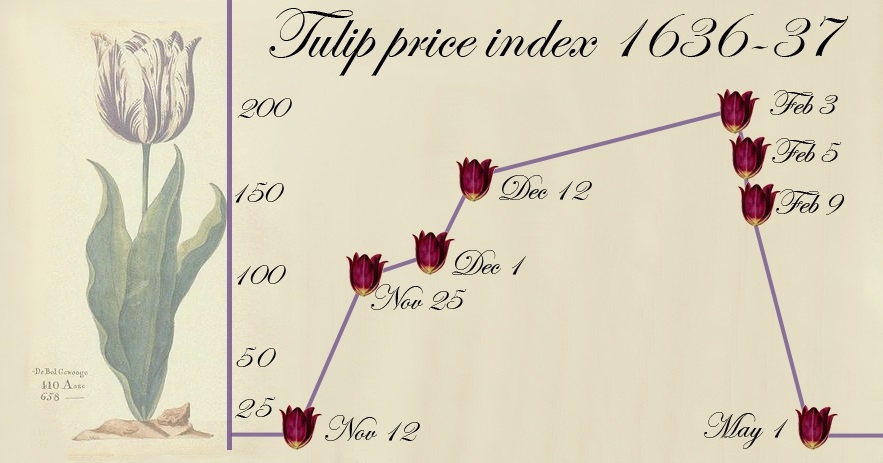 Tulip mania is a term used to describe a time during the Dutch Golden Age during which contract prices for some bulbs of the recently introduced and fashionable tulip reached exuberantly high levels and then dramatically collapsed in 1637. It is generally considered the first ever recorded economic bubble or very similar to a bubble.

In many ways, tulip mania was more of an unknown socio-economic phenomenon than a significant economic crisis. And historically, it had no critical influence on the prosperity of the Dutch Republic, the world's leading economic and financial power in the 17th century. The term "tulip mania" is now often used metaphorically to refer to any large economic bubble when asset prices deviate from intrinsic values.

The same could be said of cryptocurrency or Bitcoin. This is an unregulated currency that keeps moving up just based on headline news that "it's moving up" so many feel that they're missing out if they don't participate in this rise. The energy alone to mine for cryptocurrency takes more energy than 159 individual countries according to one estimate.

Also trying to find a place to use your Bitcoin can be very challenging. Expedia and Virgin Atlantic both allowed customers to use bitcoin but now don't accept it for airfare. A Holiday Inn in Brooklyn no longer books beds for bitcoins. Bitcoin-like anything else that is new has to go through some growing pains along with irrational exuberant speculation like Tulip Mania.

One good thing coming out of cryptocurrency is blockchain technology which is backing cryptocurrency making it valid. Blockchain helps create a very quick, permanent and secure record of transactions, eliminating the need for any third party such as a financial institution like a bank. Many companies are now testing how blockchain can help improve everything from supply chain management to global payments.