It’s Groundhog Day All Over Again for Interest Rates

In the movie “Groundhog Day,” Bill Murray plays a man forced to live the same day over and over again. If that sense of déjà vu feels familiar to you right now, it probably has a lot to do with interest rates. In January, long-term rates took a major jump, much like they did in early 2021. Meanwhile, stock market volatility returned in a big way. Will this familiar feeling continue the rest of the year, or are some major market changes in store?

First, let’s talk more about what’s going on with interest rates. In January, the yield on the 10-Year US Treasury spiked by almost 0.4%, one of the fastest jumps in decades. It started the year at 1.4 and shot all the way up to 1.8 before settling back to about 1.7.* That was similar to last year when the interest rate on the 10-Year-Treasury rose by 0.75% from early January to late March. As everyone knows, when long-term interest rates rise, bond values drop. So, should you be worried about all this if you’re heavily invested in bonds and bond-like instruments? The simple answer is no.

Although you’ll likely see a drop in bond values reflected in your next statement, just like last year you’ll also likely see those values recover at least partially in the coming months. That’s partly due to a market force called credit-spread compression, which helps “soften” the impact of rising interest rates for income investors. The even better news, of course, is that if you have individual bonds instead of bond funds, it means you have a contract guaranteeing you a fixed dollar amount of interest income for the life of the bond, provided there is no default. Your contract also guarantees you the return of the face value of your investment if you hold it to its maturity date, regardless of what happens between now and then with interest rates. In other words, if you do hold the bond to maturity, any loss in value now really is just a temporary paper loss, not a real loss.

But why have long-term rates spiked again in the New Year, and what could it mean for the rest of 2022? Well, the main reason is inflation. In December 2021, the Federal Reserve realized inflation was a stickier problem than it thought and announced an aggressive plan to combat it by raising short-term interest rates several times this year. They reaffirmed that plan in January, and the bond market reacted with a selloff that drove up long-term rates. That’s also typical and important because long-term rates need to be higher than short-term rates to avoid a flat yield curve. If this whole scenario also sounds like Groundhog Day all over again, it could be because you’re remembering 2018. That year, the Fed also raised short-term rates steadily, all the way up to around 2%.

They were able to do it because Fed Chairman Jerome Powell came out ahead of each hike and jawboned, and the bond market reacted with another selloff. That caused long-term rates to rise, giving the Fed room to raise short-term rates. It all changed in December, however, when bond investors said, “enough is enough,” and held fast. Not only did the Fed stop raising rates at that point, it started lowering them again in 2019 due to growing concerns of a recession. This was all before the coronavirus crisis hit in early 2020, at which point the Fed dropped rates all the way to near-zero again, where they’ve been ever since.

What About Wall Street?

The point is, although the Fed says it intends to raise short-term rates at least three times this year starting in March, there’s a good chance they may not be able to stick to that schedule if the bond market pushes back again (which I think it will) — or if Wall Street gets any more nervous about the plan. It’s already been plenty nervous enough. In January, the S&P 500 went from a new record high on January 4 to a drop of over 10% just a few weeks later, putting it in correction territory.** The other major indexes were just as volatile all month, partly because of inflation but mostly because of the Fed’s newly aggressive plan to raise short-term rates and what that was doing to long-term rates.

In light of that plan, timing and flexibility will be crucial for the Fed this year, as I noted in my January newsletter. And, as I noted in my 2022 market forecast, I believe the Fed will be flexible and cautious, and won’t approve any rate hikes if they look too risky. The last thing any central bank wants to do is cause a recession or a major market drop. I stand by my forecast, and by my prediction that, although we’ll continue to see more market volatility this year than last year, ultimately the stock market will have another year of moderate growth.

On the other hand, no one has a crystal ball, and anything is possible — especially in today’s markets! Either way, it’s likely we’ll see more corrections this year, and possibly an even bigger pullback than 10%. As I’ve pointed out before, for income investors that could just create a good buying opportunity if you want to get more aggressive with your allocation. You may have to act quickly, though, so now might be a good time to schedule a meeting with us to discuss your risk tolerance. The same is true if January’s volatility made you nervous and you realize you want to decrease your portfolio risk a bit before the next big drop hits. With the market almost fully recovered again, now would be a good time to make that move!

In the meantime, stay calm and remember that all volatility and uncertainty we’ve seen so far this year is just “Groundhog Day all over again” for the markets and that your ability to handle it with peace of mind is why you’re investing for income in the first place! 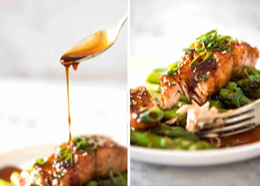 Whisk ingredients together in a bowl, then drizzle sauce over your choice of cooked protein. Recipe can be doubled if you need a larger amount.