Fed Delivers Mixed Message for the Markets at Latest Meeting

On November 2, the Federal Reserve met and raised short-term interest rates by three-quarters
of a percent for the fourth time this year. Although the latest big increase was expected, the stock
market still experienced a sell-off following the meeting in reaction to one of Chairman Jerome
Powell’s comments.* Overall, the Fed’s latest meeting was a mix of good news and bad news,
but for the most part, the good outweighed the bad.

One good outcome of the meeting is that the Fed said they plan to slow the pace of rate increases
moving forward, possibly starting at their next meeting in December. That came as welcome
news to the financial markets, which have been volatile ever since the Fed began rapidly raising
short-term rates early this year to fight inflation. The hikes have brought the Fed’s benchmark
short-term rate up from near-zero at the beginning of the year to a range of 3.75 and 4%
currently.

This rapid pace has kept the stock market down from its early-year highs (by as much
as 25% in September), pushed long-term interest rates up to their highest level since 2007, and
sent mortgage rates up from around 3% at the start of the year to just over 7% today.

Investors and many economists feel the Fed has been moving too quickly to try to make up for
lost time after ignoring rising inflation completely in 2021. The problem with raising rates so fast
is that the Fed is not giving one rate hike enough time to take effect before implementing
another. As a result, it’s possible they’ve increased rates by too much already, and the effect will
be a recessionary spiral that kicks in sometime next year. That’s why Chairman Powell’s vow to
start slowing the pace was good news to investors, but it was followed by some bad news.

The bad news is that the Fed also said their target number for short-term rates is now higher than
originally planned. At an earlier policy meeting, the Fed said they planned to bump up rates by
only an additional three-quarters of a percent. Now they’re saying they may increase them by
1.25%, which could take short-term rates up over 5%.** That’s the news that triggered another
selloff on Wall Street because—as I often discuss—higher or rising interest rates decrease the
value of all assets and put downward pressure on the markets in a variety of ways.

But there’s more good news if you do some simple math. That’s because even if the Fed does
keep raising by another 1.25%, at least the worst is over in terms of what they’ve done already,
and the end of their rate-hiking program is now in sight. With a slower schedule, it’s hard to say
how many more meetings it will take for the Fed to reach its goal, but it’s safe to say it will
likely happen sometime in 2023.

Of course, a lot will also depend on what happens when the economic effects of the rate hikes
they’ve already approved really do kick in. As I noted earlier, there’s a good chance the Fed has
already overshot and set the stage for an inevitable recessionary spiral.

Many economists are still forecasting a recession for next year, although there is a lot of debate over when it will kick in
and how bad it will be. The Fed’s commitment to slowing its pace could help soften the severity
of any recession, and, of course, they also have the potential power to limit its duration by
progressively lowering short-term rates again — just like they did in 2019.

Although the Fed insists they aren’t trying to create a recession, they are trying to slow economic
growth by decreasing demand — but just enough to bring inflation down from its current 40-year
high of over 8% to its “normal” level, which is about 2%.

So even if a full-fledged recession
does begin, it’s important to remember the Fed is the driving force behind it, and as such, they
will maintain a level of control over it. As I noted last month, the situation is a bit like the fire
department conducting a controlled burn. The fire will still look scary, but not as scary as one
started by accident and with the fire department nowhere in sight!

As for now, the economy remains fairly stable by many measures despite high inflation and
increasing signs of slowing growth. And after a very volatile September, the markets rebounded
in October, and you should see that rebound reflected in your latest portfolio statements. Our
income accounts ended October up by an average of 2-to-3% for the month (depending on your
holdings), and our stock portfolios finished the month up about 6% on average. Of course, just as
I always remind you when your holdings drop in value, it doesn’t matter much because your
interest and dividend income hasn’t changed — or it has potentially increased if you’ve been
reinvesting dividends.

There’s no doubt these are crazy times, with the markets seeming at times to celebrate bad news
and panic over good news as investors try to figure things out. But none of it is unprecedented.
This same kind of craziness always occurs when the Fed is fiddling with interest, and we’ve
lived through it many times before, as recently as 2018. As the craziness continues, the value of
your investments will probably continue to fluctuate from month to month on paper but again,
that really doesn’t matter with your strategy because “it’s all about the income”!

Enjoy the coming holiday season and as always, call our office any time if you have any questions or
concerns! 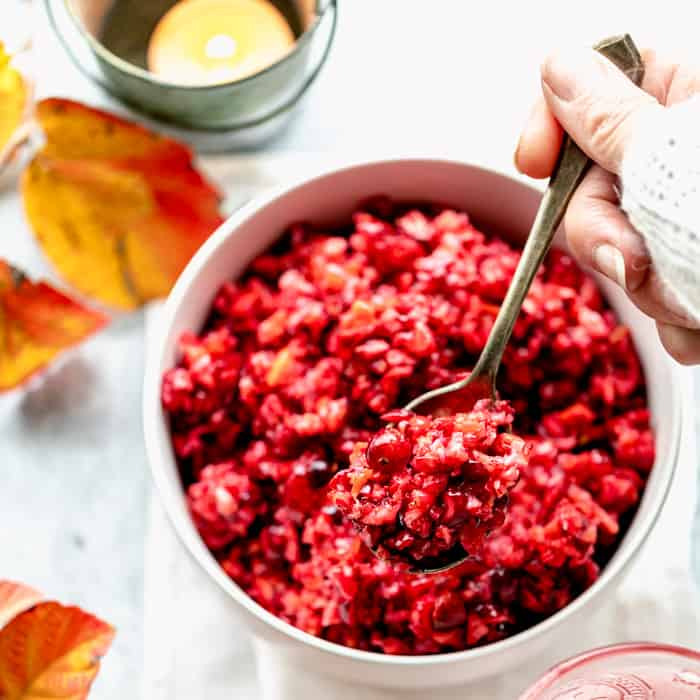 1) Finely grate two teaspoons zest from the orange. Cut away and discard the rind and white pith from
the orange, then cut sections free from membranes.

2) Pulse cranberries with zest, orange sections, sugar, and cinnamon in a food processor until finely
chopped. Chill, covered, for at least two hours to allow flavors to develop.

This recipe serves 10. The relish can be chilled for up to three days.