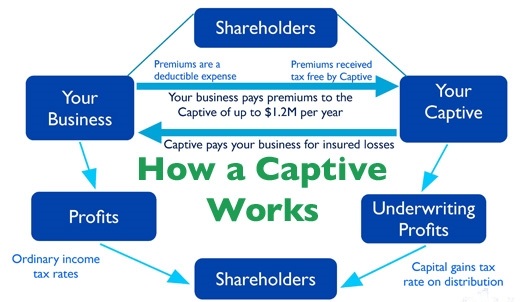 The Benefits of owning a Captive Insurance Company

A little background on what a captive is an insurance company is. Captive insurance companies are wholly-owned by one or more non-insurance companies to the risks of its owner (or owners). Captives are really a form of self-insurance whereby the insurer is owned wholly by the insured. They are typically established to meet the risk-management needs of the owners or members. Captives are formed to cover a wide range of risks; practically every risk underwritten by a commercial insurer can be provided by a captive.

To begin, let us be clear that captives are all about money. You want one to make money. It will cost money to have one. You will pay your own losses, come what may.

Captives are another method by which the risk of loss is financed. They are not inherently mysterious, or illegal, or a silver bullet for all situations and have been around for over 100 years. The fact that the insured, or an entity closely related to the insured, is the owner/operator is a separate and distinct fact, which may or may not intrude on the captive transaction.

When you apply for insurance you do so by giving underwriting information to a party who enters into a contract with you to provide repayment of losses under certain circumstances if premiums are paid and the contract is in force. There are many variations on this theme, but all of that is known as "traditional insurance." To go outside this structure is alternative risk finance, which can take many forms, one of which is a captive insurance company.

With a captive, instead of "just writing a check," you will see all the components of the premium and play a part in its pricing and delivery. This is called "unbundling."

Another critical point is that alternative risk finance is not in opposition, or the enemy of, the traditional insurance company. In fact, most traditional companies work daily with captives and other forms of risk finance. As a part of the process, someone of financial strength must agree to reimburse claims. For large losses, a large insurer is required. That is probably not the captive.

A Captive can also be used to cover gaps in coverage for business enterprise risk or interruption. Here are just some of the actual net loss Insurance policy scheduled events that can be covered with a captive. (contact our office for a full list)

There are many, many other considerations and structures to a captive. It can reinsure traditional lines such as workers' compensation, general liability, auto liability, professional liability, and credit risk. This is due to the relative ease and certainty of projecting losses and revenues with coverages in which claim payments occur years after the incident of loss, known as long-tail losses. More and more captives are entering property fields or short-tail losses. The traditional view of restricting captives to long-tail business has encountered the reality of escalating prices and lack of availability.

A captive can also be used to provide coverage and limits not available in the market, such as credit risk and terrorism. The captive can provide a tax-sheltered approach to large retentions. If no certificate is required, it can accept direct placements.

Captives are highly regulated and are required to operate as bona fide insurance companies. Therefore, acceptable uninsured risks must be present before a captive insurance company can be formed.

Once the captive is operational, with coverages designed to fit the insurance needs of the business, the captive owner or “insured” may be eligible for captive insurance tax advantages (namely with captives formed under IRC 831(b).

Captive insurance tax benefits under IRC 831(b) have been a proven strategy for improving cash flow for many mid-market businesses. It has allowed business owners in the middle market to play on a more level playing field with large insurers.

With considerable effort, there are occasional personal tax advantages that can be obtained with a captive, but these require a sophisticated, knowledgeable consultant, and there are the usual caveats about taxing bodies.

Some captives have performed so well for their owners that they have re-domesticated to the United States, filed for licensing as an admitted insurer, and offered primary coverage, replacing their risk-sharing partner.

Though Captive Insurance Companies are not benefiting plans, they can prove to be an excellent retirement planning strategy that also offers asset protection. The asset protection comes in the form of business insurance. The business is really itself against any losses. As well, providing insurance claims are minimal the business owner can withdraw the cash from the Captive Insurance Company with the long terms tax rate for any capital gains. With proper retirement planning, the business owner can withdraw the cash without paying any taxes.

Moreover, in a Captive Insurance Company set up, it is wise to use a high cash value Indexed Universal Life (IUL) policy as a strategy to grow the reserves in the CIC while having protection from the volatility of the stock market.

If your approach is well thought, properly executed and diligently managed, a captive can be an ongoing source of profit for years to come.